[Out of Tune, Dysrhythmia & Ancestral Future] [Re-forest your conscience]

By Paloma Costa January 25, 2021January 27th, 2021No Comments
Reading Time: 5 minutes
M: Awei Dueña Sebastiana! How daring to find you so happy in these difficult times!

S: Well well well, what an affront is to find you so withered!

M: Oh, forgive me for waiving formalities. But, I don’t even know the time of day, the day of the year. This mathematical belonging makes me escape from time. And well, times are rare, like someone who looks a year ahead but does not see 30 years back.

M: And this is all because I insisted on putting my beliefs in these places where people usually don’t believe in very much. It’s lonely!

S: Lonely, little Meiku, is not knowing how to multiply yourself! In dreams, seeds, places and hearts.

M: But Dueña Sebastiana, with all due respect, excuse me the question, but how can a simple being like me make an event like that?

S: And tell me Meiku, where are you coming from?

S: So, you are arriving from the Ancient Lands Cerratensis?

M: You can bet! Mother with profound roots, she taught me since I was a little girl that even among the most tortuous structures, you can find the beautiful flower of the Caliandra.

S: And from twisted trunk to trunk twisted, we are rooting for the promised utopia of the lands that are free. And you, what do you bring from there?

M: Pues malas noticias, Dueña Sebastiana. It remains less than 3% really protected in there. Her sister, the Pantanal, just with last year’s fire, was 27% burned. And the Amazon, her daughter, finally reached the tipping point of chaos, leaving us with absolute uncertainty about the future. And as young girls, we have to listen but are not listened to! See, mi abuelita? Como puedo tener fé?

S: Well, the new is right for you, it fits you. Appreciate your youth! Speak out! Y la gente?

S: So, you say the world is turned upside down?

M: And on the wrong side by choice! Negationists are becoming Presidents and good people are dying in the frontlines for protecting our life against profits. I have no capacity to understand why do we want our own extinction! What is happening with these poisoned souls!? Pobrecitas! Did pesticides affected their minds? Or it was chloroquine? Maybe a spell that went wrong? Rotten things don’t seem to perish! I am afraid of this disenchantment to shut up my singing and lead me to oblivion. Oh, nana! It is that in this beautiful world that you planted me, I can only take the dream or the memory. The rest is being destroyed!

S: Is this something to understand? Can’t you listen? FIRE! Our house is on fire! A project of death is being executed! We don’t have time! The part they lack is that one of the spirit, enchantment and good prose. They will call you cancer, terrorist, pirralha, .. but the answer, the cure we give is by acting! There is faith! Let us all be enchanted, before we become disenchanted to all.

S: Well little Meiku, once Dueña Cerrado whispered to me at the foot of the rock, under the fall, in the cradle of life, of water, that: “Here the forest, life and times are inverted. Lady of all history, forest of ancient times, I present to you ME, an ancestral future paradox! Ancient land, enchanted conscience. The way for surviving”. And this I carry as truth, all respect to the roots! Long life to mama Cerrado! And you, what do you carry on?

M: Ô Abuelita, pues pachamama en mis venas! El tiempo no me asusta, sino el clima! Y si mi pueblo sufre, pues me levanto! Lleno de oportunidades! Posibilidades! It is that making oneself dream, smile and play is like living itself! It is necessary! It’s the way to do it! To resist! Exist!

S: Well understood! Against the arc of deforestation, our armament will be the facts of history. And we shall not fall. Our interest is public and collective, a Magna responsibility to the continuity of life! Demarcating what is ours by law and acting to protect those who have been protecting our Forests since colonization, this is how we do it. Our conscience lives through the lands! And I repeat to you, it’s in affection & community that we fight. Avante, hermanita!

M: Avante, hermanita! That the coffee is already ready and the land resists in war! Times are changing and so need we! With vultures walking among the patios, let us be like the Seriema: light & attentive.

S: Awei! Long live the Tamanduá! The Lobo-Guará! Warriors of the Cerrado! From now on, one can only know how to flourish in a joint dreamed dream! So, let us flourish, one by one, as the Caliandra after the fire! After all, isn’t this exactly the way how I announce the end of fire times to you? With the beautiful flower of the Caliandra! The balance of heavens and worlds must be restored in an announcement of spring.

M: And who knows if in somewhere, some story, some meeting, we don’t change the gravity of things? Reforesting the present, the conscience, the minds and the souls.

S: Yes! And maybe in one of these encounters we postpone the end of the worlds!

Note from the author:

I wrote this story after a long period of isolation in Brazil, due to the covid-19, when I traveled to the Chapada dos Veadeiros, the biggest protected area of the Biome I was born in, the Cerrado.

I was a long time without any contact with nature and on the way to Chapada, seeing all forest destroyed by soy, it made me think about everything we lost last year.. We lost so many lives, so much life. Sometimes this online world is indeed a parallel world that takes us out of reality, where destruction is ongoing and unstoppable. And as much as we know it, it’s different when we do see it.

But, we need to keep strong. We need to keep fighting. It is beyond us individually. It has always been a collective fight. So, at some point, on this day, I remembered the words of the Shaman Davi Kopenawa Yanomami. He was one of the last people I had seen before Pandemic. And on this occasion he told me that if we ever stop dancing, singing, laughing and painting our bodies (traditional culture from indigenous people from Brazil) it was because the merchantory people won. And the one thing I know for sure is: that if the merchantory people win, we will all lose. So I wrote the stories below, which are the materialization of conversations I had or could have had.

The story is a conversation between Meiku, it’s a name that comes from the Kayapó culture (Meikumrej = Thank you) and it’s a young character based on the Myth of the Calango Voador by Tico Magalhães, and Dueña Sebastiana, the typical Brazillian elder from the territories, who likes to tell histories about the land and their conversations within the living things in the forest. In this story, Dueña Sebastiana is the manifestation of the Cerrado, bringing this tormentous calm to those who reach her for knowledge.

The text aims to bring a new perspective towards everything that is on course in our lands. We need to keep strong to fight for our common home. So I hope the conversations below spark and inspire a little faith inside the hearts. And I do know that with the translation some meanings were lost but, I do hope that in both english/spanish it’s understandable what was the message.

Just for noticing: Awei is how the Yanomami people in Brazil greet each other. It means positive things, understanding. 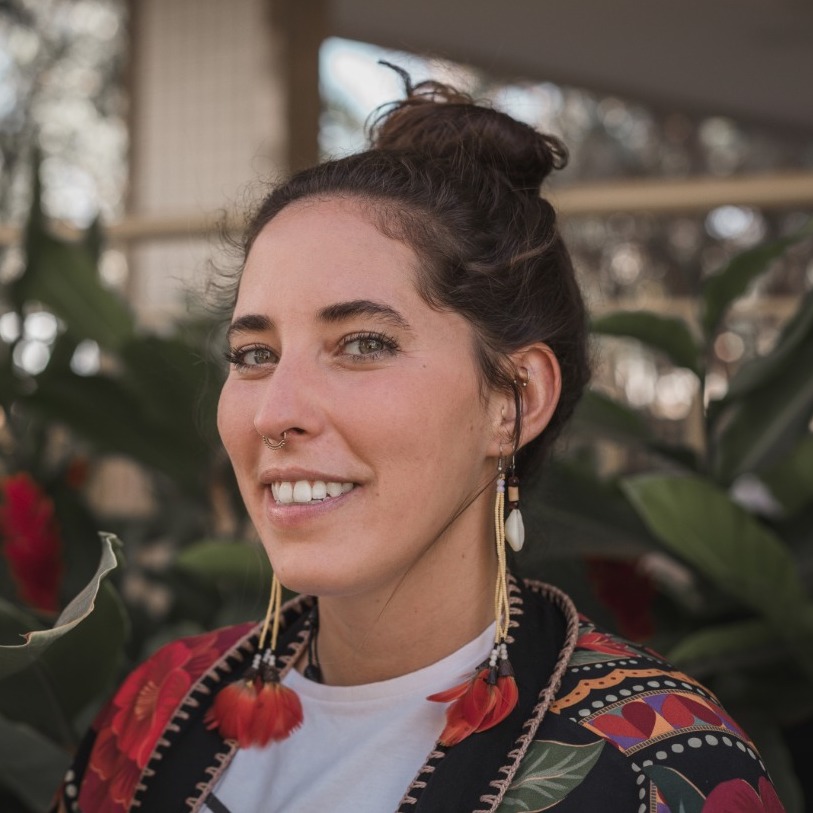 Paloma Costa is a young climate-activist from Brazil, who is an advisor at Instituto Socioambiental, member of the UN SG's Youth Advisory Group on Climate and Abu Dhabi Youth Voices. She coordinated the Working Group on Climate of the youth-led organization Engajamundo, from 2018-2020, and co-founded Ciclimáticos and #FreeTheFuture movement. She coordinated the brazilian youth delegations to COP 24th, COP25th, UNLACClimate-Week, Youth Climate Summit, Climate Action Summit and #AmazonCenteroftheWorld. She participated in the opening of the Climate Action Summit and represented the NGO's in the 43º Session of the UN Humans Rights Council.