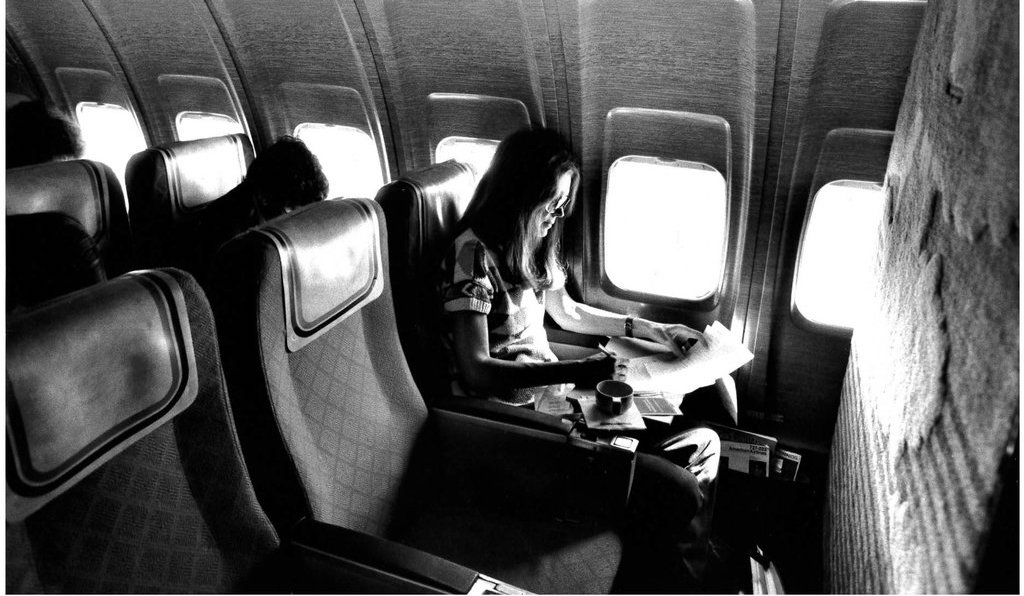 I have been involved in feminists organizations for more than 5 years now. And I’ve always felt the need to hold my activism onto role-models, not because they are perfect (nobody is), but because they open new possibilities. Gloria Steinem is one of them. In her book My life on the road published in 2019, she revisits her nomadic and engaged life. I take on 5 lessons from her story.

Turn your passion into your job

Gloria Steinem co-created with Dorothy Pitman Hughes, Ms. in 1971. It is one of the first women’s magazine with the aim to raise awareness on gender, class and race issues. This magazine wants to “do the revolution rather than just the diner”. The name is powerful, multifaceted and takes ownership of the stigma to turn it into something positive.This magazine looks like the co-founders, challenges the market’s rules and smashes the press codes of the time by proposing socio-political analysis instead of fashion and beauty advice to women.

In her book, Gloria Steinem explains perfectly how its non-institutionalization enabled an unusual editorial freedom and the emergence of new social issues treated with integrity and attention.

The downside is a precarious economic situation as the magazine lives from subscriptions and donations. Despite this, Ms. has what we would qualify today as a CSR policy, raising funds for grassroots organizations (womens shelter, planned parenthood centers…) and offers in-kind help.
Also the freedom in the form, topics and from the economic rules of the press sector is still very rare today. Of course with the internet and social media boom, everybody can now express their opinion on anything and everything and gather an online audience. But there’s a big gap doing it with half of Ms.’s integrity. In her magazine, Gloria Steinem puts a lot of herself, especially on how she is detached from material success. Her objective is not to be the best but to open new platforms and dialogues about underexplored issues. That’s also what we are trying to humbly do with Libera.

Travel as your home

Gloria Steinem always lived a nomadic life. From compelled and constrained as a child, it became chosen and liberating as an adult.

““I can go on the road – because I can come home. I come home – because I’m free to leave. Each way of being is more valued in the presence of the other.”

She inhabits travel, encounters and exchanges as a refuge, a home. She proves that a material home can be dissociated from a spiritual one and that we don’t need a physical place to feel at home.

Travel also enables questioning, going out of your comfort zone and evolving. For me it has been a way of growing, learning humility and discovering spontaneity.  Being too cerebral and not enough connected with my emotions, this is resonating in me.

“Taking to the road—by which I mean letting the road take you—changed who I thought I was.The road is messy in the way that real life is messy. It leads us out of denial and into reality, out of theory and into practice, out of caution and into action, out of statistics and into stories—in short, out of our heads and into our hearts.”

In other words, travel enables me (and enable in general I believe) to connect myself with my emotions and live in the moment. The ultimate pathway to be happy ? But is it the only goal of travelling ? At a time when travelling has never been easier and globalized, one can wonder what do we pursue when travelling. Crossing off a destination list, historical sites and restaurants ? Gloria Steinem at the opposite preaches a travel ethic where authentic encounters matter the most.

“As Robin Morgan wrote so wisely, “Hate generalizes, love specifies”. Thats what makes going on the road so important. It definitely specifies.”

For me the best part of traveling will always be the unexpected meetings and simply sharing moments with strangers.It connects us to our shared human essence, drives away prejudices and humble us.

Be a caring community organizer

She embodies a model of empathetic community organizer. She is aware of her power & privileges associated to the fact that she is a white middle-class heterosexual  women. No disdain or “white savior” complex. Her motto is listening and asking how she can help. She supports communities and enhance their agentivity. She explains her method by listening to people who are used to stay quiet and invite people who are used to talk, to listen instead, thus creating fair, safe and kind spaces of debate. What could be obvious, is still challenged today when power and speech are still confiscated by white cishet upper-class men. 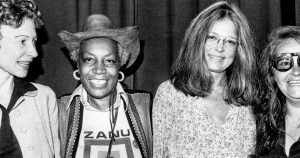 The collective empowers, boosts and fulfills. My feminist activism empowered me by showing me that we are thousands (and maybe even millions) to call for the same social changes. My feminist activism boosted me by giving me theoretical and practical weapons to analyze, unpack and smash power and oppressions in my professional and personal life. My feminist activism fullfilled me by proposing a bright future, more in line with my beliefs. I so often burst in joy when listening to a researcher or an activist putting into beautiful words my prolix thoughts.

But the collective is tiring, takes time and disturbs. The feeling of fighting a system so embedded in every aspect of our societies that it will never disappear and the physical and psychological exhaustion from balancing submerging professional and activists lives. The feeling that we always have to dialogue, negotiate and think things through, that smashing systems of domination and rebuilding fairer systems is never done. Never feeling that you belong in “mainstream” places and that people carry a lot of prejudice against your activism. Every feminist knows what’s it like to be mansplained, accused of being a mood-killer (hello Valeurs Actuelles) or a fanatic and that’s maybe you should change topics (even though you didn’t start that conversation). Even when we are convinced of our fight’s legitimacy, these difficult moments put together can create profound wounds.

Sisterhood as a slogan

A big part of Gloria Steinem’s book talks about the social issues of american women in the second part of the 20th century.

The story about the Trans World Airlines’ stewardesses striked me. Underpaid, sexually harassed by their male counterparts and treated as trophy women, they decided to organize themselves and ask for more rights during the 1970’s. Gloria Steinem talks about them with care and admiration. She describes strong women, conscious of their professional value and dignity ; turning the usual cichés about them around.

The book is also an overview of leading feminists from the time and among them, incredible badasses women that I didn’t know before.

Florynce Kennedy was a lawyer, afromenist and civil rights advocate and Gloria’s Steinem fellow activist. She was a brilliant and charismatique that has, among many other things, defended Valérie Solanas accused of attempt murder on Andy Warhol and lead the class-action lawsuit Abramowicz v. Lefkowitz trailblazing and inspiring of Roe vs. Wade, the case that legalized abortion in the US. On top of her priceless contribution to feminism, Florynce Kenney left us with hilarious quotes such as this one about marriage “Why would you lock yourself in the bathroom just because you have to go three times a day?”.

Alice Walker is a novelist, poet, american activist and was Ms.’s editor. Her most famous book The color purple, published in 1976, recounts the experience of a young african-american women in a racist, patriarcal world, pioneering afrofeminism or what she likes to call womanism (contraction of women of colour and feminist). Next to her commitment to feminism and anti-racism, she is a supporter of pacifism and the palestinan people’s cause.

Bella Abzug was a lawyer, member of congress, activist and leader of the Women’s Movement. After being one of the first women lawyer of the country, she was elected in Congress from 1971 to 1977 where she tirelessly pursued a progressive agenda, fought for LGBTQIA+ people rights and the end of Iraqs’ war. After that the founded several feminists NGOs such as  the Women’s Environment and Development Organization (WEDO). Gloria Steinem sums her up perfectly in her book.

“She didn’t put her finger to the wind; she became the wind.”

Also nicknamed Battling Bella, her style reminds me a lot of The Squad (Alexandria Ocasio-Cortez, Ilhan Omar, Ayana Pressley, Rachida Tlaib), all women of color, social activists, representing the left wing of the Democratic Party and today member of Congress.

Integrity and authenticity are her blueprint 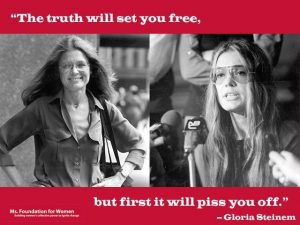 Gloria Steinem embodies two major values for me: integrity and authenticity. These 2 values have in common a profound sense of responsibility and to personify what you advocate for. Every person that has been involved in activists circles know that you can find publicly inspiring people who are privately toxic.

This book and in the records from other feminists, we understand how much Gloria Steinem is full of kindness, listening, patience, wisdom, generosity and humility in her social and professional interactions. And that’s a major character trait: the professional is also private and she gives importance to creating an authentic relationship with her companions. When she quotes this Native Elders’s saying “You cannot think yourself into right living. you live yourself into right thinking” that’s to show us the prevalence of what you live to know yourself, think and imagine the world; always remembering that private and professional intersects.

But authenticity is not only applying positive values, it’s also accepting emotions labelled as negative by society. Books of personal development will tell you this: you need to accept your anger. Gloria Steinem just says it better than them.

“This was my first hint of the truism that depression is anger turned inward; thus women are twice as likely to be depressed.”

This anger, very different from hatred, fuels our activism. And thanks to Gloria Steinem for giving us precious words describing our common feminists experiences !