Control over Women’s Outfits and Cultural Exception: a French Obsession

It seems like not a week can go by in France without yet another debate about women’s and girls’ outfits, most of the time initiated by men whose opinion was never requested in the first place. For the past few weeks, it is more precisely schoolgirls’ outfits that have been the center of public attention in the country.

It all started in mid-September when the hashtag #Lundi14Septembre (Monday 14 September) was  launched by young activists on social media to protest against the sexist dress code and rules in place in their schools, asking students to wear shorts or a skirt that day. This hashtag followed the previous #BalanceTonBahut (the #metoo of high schools) which was started a few weeks prior and had already shed light on the crippling sexism in French schools through thousands of stories of harassment and sexual assaults. One of the stories that drew major media attention is that of a school principal in Vizille who, after emailing all the students to strongly advise them against wearing “provocative and indecent outfits”, wrote in another email about a student who had protested against this dress code, “the nerves of that little brat. I won’t tell you what I wish upon her. Signed: Michel Fourniret” (Ed: Michel Fourniret is a famous pedocriminal who raped and killed at least 8 young girls between 1987 and 2003). This story is unfortunately not an isolated case and is a true reflection of the systemic problems affecting the daily life of thousands of teenage girls.

“Covered or uncovered, the female body is always guilty”

One could have thought that such actions would have been unanimously condemned and the high schoolers movement supported by a government that keeps emphasizing on the importance of equality in French schools. But the French Minister of Education Jean-Michel Blanquer chose slut shaming instead, by asking students to dress in “a republican manner”, while others like the “philosopher” Alain Finkielkraut complained a few days later on national TV that seeing young girls wearing crop tops  in the street was “distracting” him.

This disgusting wave of sickening statements and opinions hit a new low with the publication of an Ifop poll in the French newspaper Marianne, asking people’s opinions on the outfits that teenage girls should be allowed to wear or not. From the very idea of the poll itself to the content of the questions or the iconography, everything was problematic, but it also showed a wider structural phenomenon that is deeply ingrained into French culture, by which everyone feels legitimate in sharing their opinion on what women wear or do. 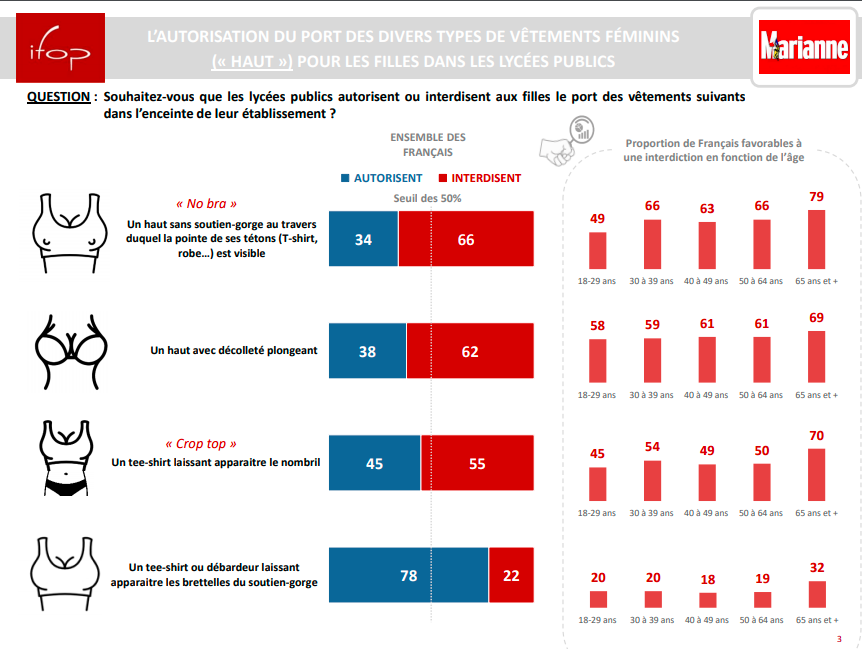 During the summer of 2020 already, several stories related to women’s outfits in public spaces made national news and sparked debates on social media. While the police was asking a group of women who were sunbathing topless on Sainte-Marie-la-Mer’s beach to cover themselves, a Parisian was denied entrance to the Orsay Museum because the cleavage of her dress was deemed inappropriate. The solution looked clear from there: women should “cover”up more to have less problems. But our good old patriarchal society has more than one trick up its sleeve to control women’s bodies. Covering yourself “too much” is also an issue in France, as shown by the countless stories regularly shared on social media of women persecuted by police for wearing a “Burkini” on the same beach where naked breasts are also an issue, or by the countless TV debates between people who are never, directly or indirectly, in contact with Muslim women but yet feel legitimate in giving their opinions on what they should or shouldn’t wear.

You’ve guessed it: it’s never been about outfits, but always about power and maintaining the status  quo.

The false pretense of the French cultural exception

Although it occurs in many countries and in many different forms, this phenomenon has the  particularity in France to be often legitimized by the sacrosanct French “cultural exception”. This  expression designates certain specificities, current or past, of France in the cultural sector compared to other countries. Although each country has cultural specificities very distinct from that of its neighbors, France’s superiority complex has led us to create a different term to talk about ours, and even to use it to expand our colonial empire.

The cultural exception hence inherently implies a superiority of French culture over others, but has  also been used as an excuse for centuries to impose our language, our philosophers or our habits to cultures deemed inferior. This colonial and paternalistic concept has always been a tool to maintain power and control over oppressed bodies. Nowadays it is used profusely in all sorts of debates, but comes in particularly handy to some people when trying to justify or defend certain sexist and archaic practices. That’s how in 2018, 100 women took a stance in Le Monde to defend “the freedom to  bother”, “getting hit on in an insistent or clumsy way” and French chivalry, which would all be the opposite of the victimizing puritanism that the #metoo movement and other “feminazis” are trying to  impose on society. Basically, the authors of this open letter use the concept of cultural exception,  which in their head is just innocent romanticism and gentlemen holding the restaurant door for you while smoothly grabbing your butt, to justify and legitimize a mix of “practices” from sexual assaults to street harassment or “compliments” (still unsolicited) from strangers in the metro. While the authors of the text pretend to defend “sexual liberty”, they really only defend the freedom of (white) men to dispose of women’s bodies however they please, in the name of a supposed cultural exception that is actually guaranteeing the status quo of power dynamics.

Looking at this mechanism more closely, we realize that the same set of arguments is used when it  comes to controlling women’s outfits – and by extension their bodies, which creates a paradox in which women are always in the wrong, whatever they wear or do, eternally stuck between the myth of the  Madonna and the whore.
We are constantly told that our “radical” feminism and our struggles are imported from abroad, especially from the U.S., and that they have no place in France, land of chivalry and candid seduction, since they would lock us into a “politically correct” puritan and totalitarian society.

The truth is that this feminism offers the opposite: a society in which each individual, regardless of  their gender, would be free to wear what they want, without ever being scared for their physical integrity or safety in public spaces. This demand may sound simple, but definitely seems very difficult to implement in the land of cultural exception, where the only true exception is in reality our incapacity to question the conservatism that is profoundly rooted into a society that we believe to be so liberated. 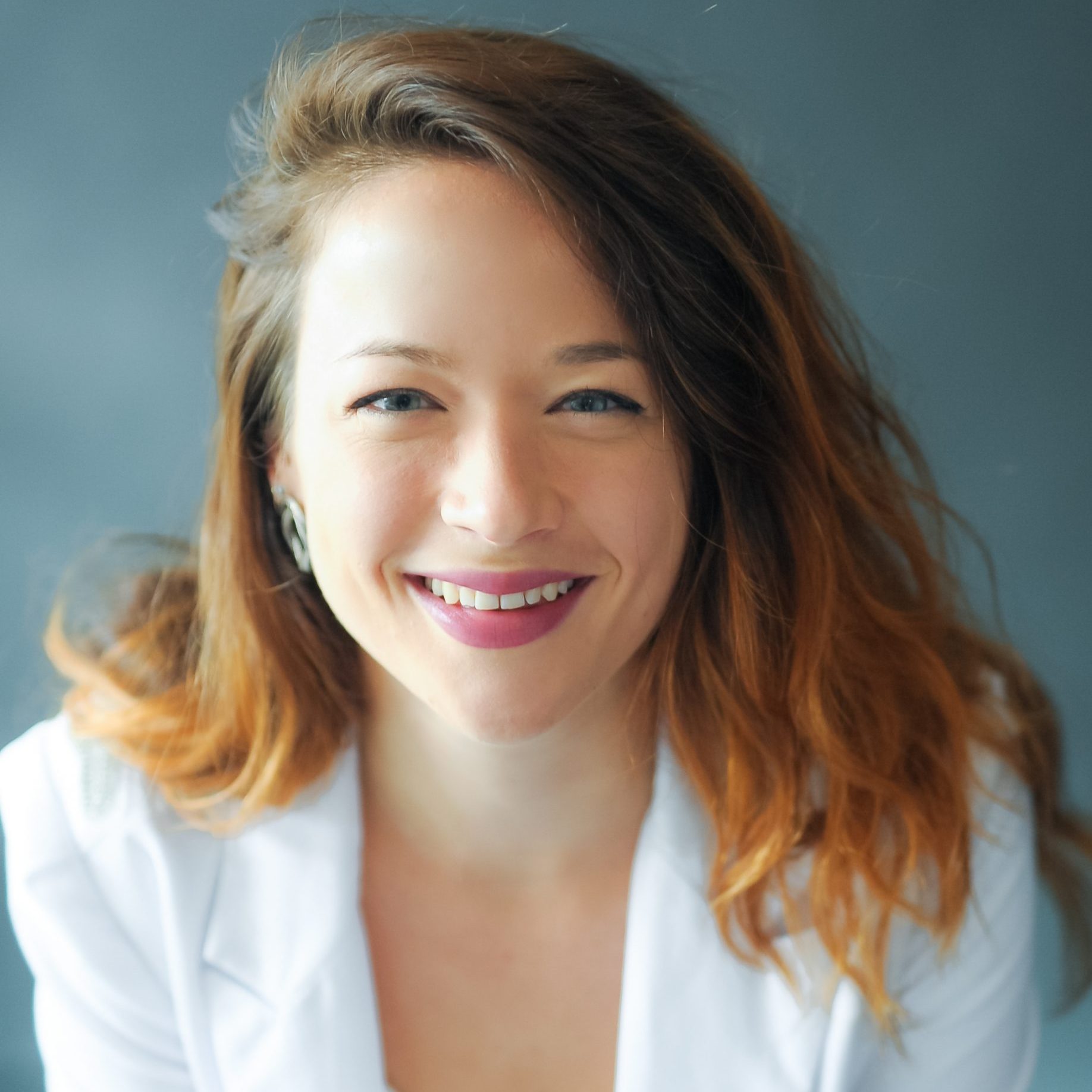